It's a slow day at work (warming up for the Christmas party), so I thought I'd blog about Accenture instead. Actually, this is a rant about marketing departments, not Accenture per se, they just happen to have riled me this morning.

A friend of mine works at Accenture, and this morning retweeted an image from their current recruitment marketing campaign. It's a great pic (see below), and contains a very clear message. They're looking for Big Thinkers, the ambitious, those who aspire to a Better Future. The message itself is literally spelled out, "Future > Present", and visually it taps into something many men (possibly a tad too gender specific, but maybe I'm being over-sensitive) will immediately understand: I want to be an astronaut. That's my dream. 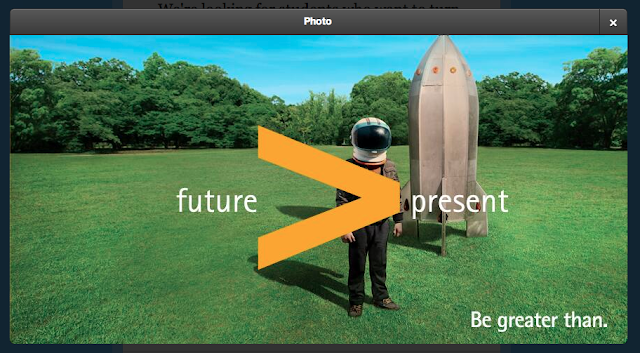 It's a seductive message - and for anyone remotely ambitious just starting out (it's aimed at people just starting their working lives) it makes Accenture look like somewhere you'd like to work. Maybe not quite as cool as Google (who do genuinely have a "Moonshot" division), but a good option nonetheless. So you click through.

And that's when the wheels come off. Apparently the recruitment budget was spent, in its entirety, on the campaign. Having nothing left they got the guy in Accounts' brother to knock up the campaign microsite. He's jazzed it up with a carousel of incredibly happy people in grey suits (and ties - really, who wears a tie these days) - but I'm pretty sure none of them are Felix Baumgartner or Commander Hadfield. 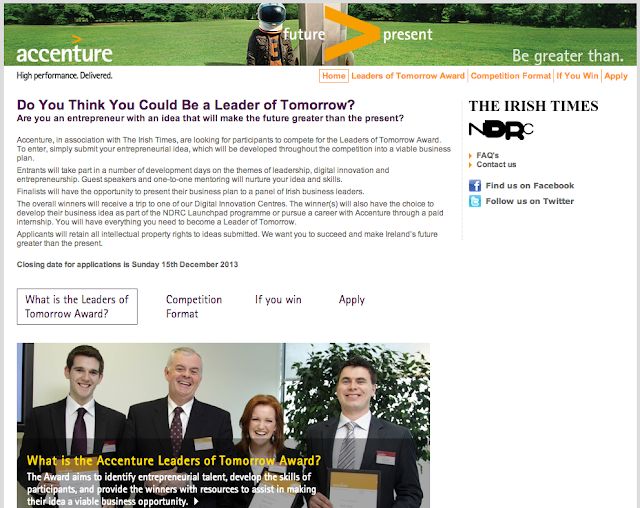 Pretty much everything on this page (font, use of white space, formatting, images) is bad. I imagine it's just the default Sharepoint "Add new microsite" template, but that's not really the point. This page, which is where things get real, also has a very clear message: we're accountants, or possibly management consultants, but either way you're going to spending a lot of your time in front of a spreadsheet, and it's not memorising launch code sequences. In addition, we really don't give a sh*t about design, the process of creation, attention to detail, refinement or finesse. We're robots. With spreadsheets. And sometimes we hand out awards to other spreadsheet-toting robots.

In reality I've known lots of people who've passed through the Accenture machine, and they're not all number-crunching automatons - they're generally intelligent, hard-working, interesting people, with a lot to say, on a lot of subjects.

This is a masterclass of old-school marketing-reality distortion, and rather than making Accenture an attractive place to work, it makes them look desperate ("we couldn't think what to do, so we just made it up"). There are lots of good reasons to work at Accenture - wanting to be an astronaut isn't one of them.

Posted by Hugo Rodger-Brown at 9:30 AM