Having had a night’s sleep since my slightly hysterical twitterings from the f8 conference keynote (below), here is a slightly more considered post.

The combination of the new Facebook Like button and their Open Graph protocol could kick-start the semantic web (finally). Is this a problem for Google, or an opportunity?

(Just to recap – the Open Graph Protocol (OGP) is a set of HTML meta tags that allow developers to apply semantic markup to a web page - Facebook may have just killed off the microformats community in the process of defining their own protocol. The Like button is a way for users to interact with a site – they may have killed off Delicious and Digg with this one.)

Applying OGP tags to the HTML of a web page applies the necessary metadata to allow semantic interpretation of the page (whether it represents a “movie” or a “book” for instance). That said, there is no barrier to Google using this data to improve its indexing of the web. Just as Facebook can now see that an IMDB page represents a “movie”, so can Google. The semantic web is now a reality.

The real dilemma is this: Google’s secret sauce, and the thing that gave it its mojo in the early days, was its understanding of the “popularity” of any given web page, which it measured (and probably still does) by applying complex algorithms to the value of links in from other web pages. It’s a bit like the ATP Tennis rankings – you gain more points from winning matches, but the number of points you gain depends on who you’re playing, and at what stage of the tournament. A link to your site from the BBC website is worth more that a link from this blog. So far, so normal.

Facebook is of such a scale these days that it is now in a position to apply its own re-interpretation of the web – at least any page that any of its 400 million members have come across (which you have to assume is most of it). Facebook’s Like button will give it access to explicit recommendations of pages across the web. The Like button alone allows Facebook to compile an index of the web that connects you to any page via a sequence of recommendations, each of which has a relevance ranked not only by the “influence” of the recommender, but by their relationship to you, as a person. At the same time, each page that implements the OGP tags can be indexed semantically and placed in the correct context. (And just as Google promoted the use of correct HTML through its SEO recommendations, Facebook will encourage the use of OGP through its involvement. I would strongly recommend any web developer to implement OGP tags in their website, starting today.)

The net result is a search engine that is not only based on the recommendations of people I know, but that actually understands the context and content of the pages it is indexing. This could be the holy grail of search.

This is the beginning of the next phase of the Web (3.0?) – post-Google, semantic and personal. You have been warned. 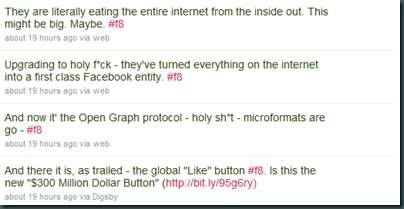 and apparently it is very simple to implement. A client told me the task of integrating to their ecommerce retail store was around 30 minutes!