What I want from an ad network


There’s been a lot of fuss made recently about the inclusion (or possibility of inclusion) of ad-blockers in iOS9, and what that might mean for the web as a whole. On the one hand, no one wants a Flash ad banner that morphs into a dinosaur and then rampages across the screen and up onto the companion skyscraper ad**; on the other hand, ads do pay for most of the content on the web that we, as consumers, get for free. It’s  the Faustian pact of the web.

So, thinking about this, and my responsibility, as a nice chap, to accept ads as the price for free content, I came up with this (totally impractical) solution.

I would happily accept adverts on the proviso that I could log in to the ad serving network behind the ads, and:

1. View all of the ads that I have been served
2. View all of the sites I have visited (as recorded by them)
3. Modify what content I want to see (no more car ads)
4. Wipe all of my stored data (even if that was restricted to once per month)

Is that too much to ask?

** Of course you do - agencies, you can have this idea for free, no royalties required
Posted by Hugo Rodger-Brown at 11:16 AM No comments:

Short post this - I just wanted to share something that I've noticed over the past three months that gets very little attention in the office workspace press, which is currently obsessing over whether to sit or stand whilst at work.

I've started getting in to the office earlier, and I have an east-facing window next to my desk. When I get in to the office, the first thing I used to do was turn on the lights. Now I don't and I sit at my desk for at least an hour with just the natural daylight coming in. And I can't tell you how jarring it is when someone from the 'west-side' (i.e. dark in the morning) comes in and turns the lights on.

Daylight is far easier on the eyes, and more relaxing and comfortable than standard office strip lights - and it's surprising how dark it can be outside whilst continuing to work. Give it a try.
Posted by Hugo Rodger-Brown at 8:24 AM No comments:

So much so, in fact, that this time last year Shib (our CEO) announced that in 2014 he was going to head to Paris for the final stage. Fast forward twelve months, and we've moved the office over to Paris for the week in order to make this happen. Airbnb sorted us out with a great apartment in the 7th, complete with discordant jazz clarinet coming from the neighbouring flat.

On the morning before the final we took to the Vélib' (the original city bike share) and cycled much of the final lap - including the full length of the Champs Elysee (up and down) and a circuit around the Arc de Triomphe. 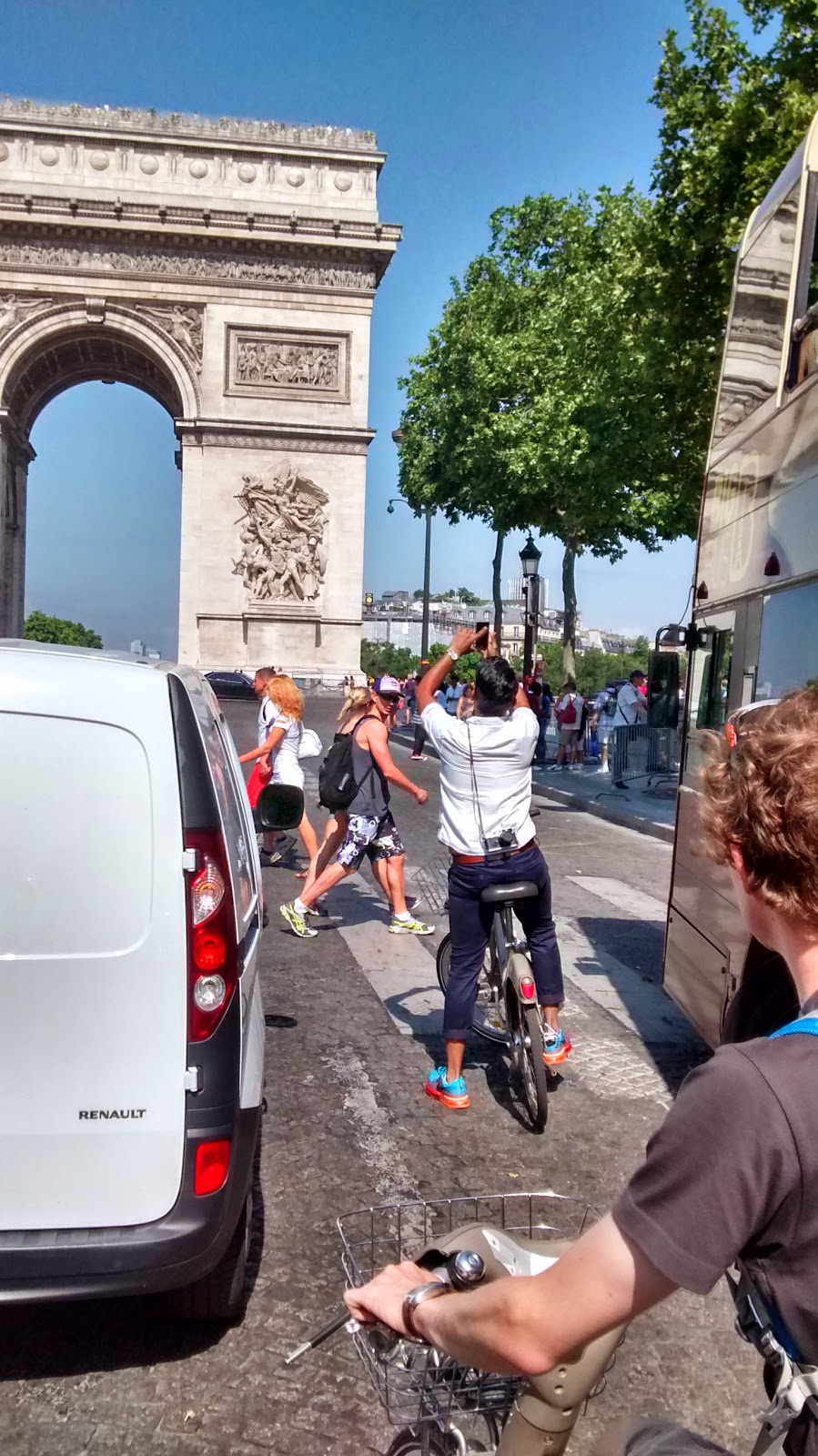 Since we had to do a fair bit of research to work out where to watch, I thought I'd share our experience...

First thing is when to arrive. The timetable for the stage (available online) is pretty accurate, and the first 'event' is the arrival of the 'caravan' - basically a bunch of honking, hooting, carnival floats that precede the peloton by a couple of hours. We figured we should get to our spot at about the same time they did (so anticipating a two hour wait for the action). This is about right - we found a spot on the river, within the lap (so we got to see the peloton eight times), and the crowds were pretty thin at this time.

Shib wanted to be close to the action, so he took the river side of the road, whilst I stayed on top in the Tuileries gardens, with a view down on to the road.

And then we waited. And I fell asleep. And then it all kicked off.

We had a fantastic view - I've posted some of my pics on Flickr, and Shib has some spectacular roadside action shots - we had about £4k worth of camera equipment between us, and of course the best shots came from an iPhone.

And then it all ended. Being a little way from the end we weren't entirely sure it had happened - you lose count of the laps, and then suddenly you realise they're not coming round again. The medal ceremony is short and snappy, and an hour later the whole thing's disappeared. And throughout it all the crowds really never became a problem - someone came and stood by me and had a perfect view and he only turned up halfway through the race.

Altogether it's a great experience - definitely to be repeated.

Posted by Hugo Rodger-Brown at 5:41 PM No comments:

The current state of TV

A couple of weeks ago I decided I needed to get up to speed with GoT, and set about watching series 1-3, so that I could catch up to the latest series as it played out live.

This was my experience.
So far, I've watched (most of) three series of GoT, and along the way:
This the current state of TV.

Despite my best efforts, I wasn't fast enough - so although I have now finished series three, and series four is available via my NowTV subscription - the first three episodes have already expired. And because the series is still in progress, it's not available for streaming anywhere else.

Posted by Hugo Rodger-Brown at 5:58 PM No comments:

How did we end up with this?

A couple of weeks ago I decided to do something about it. I activated two-factor auth on every account that supported it, clicked the 'generate temporary password for devices' link on Twitter, and then hit the nuclear button by downloading LastPass and beginning to upgrade my passwords (I don't really use 'password' as my password - I also use 'P@ssword', 'Passw0rd!' and 'pa55w0rd' - I'm always thinking, see).

It was a PITA changing old passwords, but I just about got around to changing the important things (accounts attached to credit cards, and core identity providers) when my new phone arrived (Moto-G, which is fantastic, btw, although I am comparing it to a 2.5 yr old HTC).

What a clusterf*k. Activating two-factor auth and various device checks means that I am constantly being asked to re-enter passwords, only this time I have no idea what those passwords are, as I've changed them from the ones I know to the brilliantly uncrackable long, complex, passwords generated by LastPass.

On the plus side I've discovered that Google Keep is a very efficient way of copying complicated passwords in plain text between devices. On the downside, lots of apps don't support 'Paste' on Android, so I have to write them down instead (hence a pocketful of Post-It notes). I think I'm now technically less secure, as I'm far more prone to social engineering hacks that I was before.

I really hope that those who hold our secrets (no, not the NSA) are working on solutions to the secure login conundrum, because no one outside of the tech industries would use a computer if it was as complicated as the situation I find myself in.

Posted by Hugo Rodger-Brown at 9:06 AM No comments: